The annual Group of 8 Summit was held in Japan from July 7th to 9th, 2008 in Toyako, Hokkaido.  A few days before that on 27th-29th June 2008, the G8 Religious Leaders Summit 2008 was held in Osaka and Kyoto with the theme: “Living with the Earth: Messages from World Religions”. 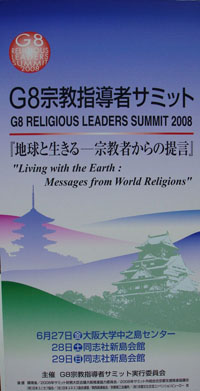 It was a great pleasure for me, that I was invited by the host organization, the Steering Committee of the G8 Religious Leaders Summit 2008 to participate in this historical event in Osaka and Kyoto.  The support organizations of G8 RLS 2008 were: Ministry of Environment of Japan, Osaka Promotion Committee for the G8 Finance Ministers Meeting, Kyoto Committee for the 2008 G8 Foreign Ministers Meeting, The Japan Committee of UNICEF, National Federation of UNESCO Associations in Japan, The United Nations Association of Kansai, Kyoto Convention Bureau, Kyoto Chamber of Commerce and Industry.   Leaders and members of different world religions Buddhism, Christianity, Hinduism, Islam, Judaism, and Shinto from the countries like Argentina, Brazil, Cambodia, Canada, Congo, Egypt, France, Germany, Guam, Israel, Italy, Japan, Lebanon, Kenya, Mongolia, Morocco, Myanmar, Pakistan, Russia, Saudi Arabia, Senegal, Switzerland, Taiwan, Tajikistan, Thailand, Turkey, UK, and USA came to Japan to participate in this important event in order to discuss issues such as global warming, the fight against poverty, ethno-religious conflict, family values, and the numerous other issues of concern in today’s world. Governors and the Mayors of Osaka and Kyoto, representatives of international organizations such as UN (UNICEF and UNESCO), World Bank, ambassadors of some countries to Japan and scholars attended G8 RLS 2008.  The relationship between humanity and the earth was under the discussion, as well as measures for implementing solutions for the benefit of people in the 21st century. Some greetings and messages of the G8 RLS 2008:
1.    HRH Prince Samdech Norodom Sirivudh, Supreme Privy Counselor to HM King of Cambodia, Former Deputy Prime Minister of Cambodia: “…the G8 Summit Leaders should kindly listen to the spiritual voices and consider the messages and recommendations of the G8 Religious Summit Leaders…”.
2.    Lord George Carey, Former Archbishop of Canterbury: “As the world’s leaders gather in Japan for their annual summit, I hope and pray they will divine better ways of promoting peace, justice, and equity in a world torn by war, and challenged by plagues of violence, virulence, disease, and poverty. The world’s religious leaders gathering before and during the G8 meeting stand in support of governments even as they work together to learn better ways of promoting inter-faith dialogue and of working together towards common goals of a world free of poverty and suffering”.
3.    His Eminence Dr. Ali Gomaa, The Grand Mufti of Egypt: “It is time that the leaders of the world religious traditions come together, not just to a dialogue to develop an international constitution of coexistence through which we can learn to live together peacefully in the world as practitioners and believers of different faiths. Not only by doing this can we curb extremist talk and actions. We must take a collective and unequivocal stance against terrorism and killing innocent civilians. We must speak out loud and clear against racism, anti-Semitism, Islamophobia or any other form of discrimination”.
4.    Mary Robinson, President, Realizing Rights, President of the Republic of Ireland: “World religious leaders and G8 nation leaders meet in Japan at a momentous moment, marking the 60th anniversary of the signing of the Universal Declaration of Human Rights. These gatherings thus offer a unique chance to realize these rights and, by that means, our shared goals of peace and social justice”. 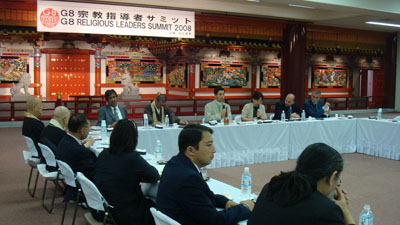 We participants had an opportunity to visit many temples and shrines, like Shitennoji Temple (the oldest Buddhist temple in Japan, established in 593 AD) and the Slums Area, Sumiyoshi Grand Shrine (the oldest Shinto shrine in Osaka, established in 213 AD), Nempo Temple, Konko Church (a new Shinto organization) in Osaka,  and Kamigamo Shrine, Nishihongwanji & Bukkoji Temples in Kyoto.
At the end of G8 RLS 2008, “A Proposal from People of Religion to leaders of the Group of Eight” was adopted and submitted to the heads of states prior to G8 Summit in Toyako, Hokkaido. This proposal is the third communiqué from religious to political leadership since the G8 meetings began. 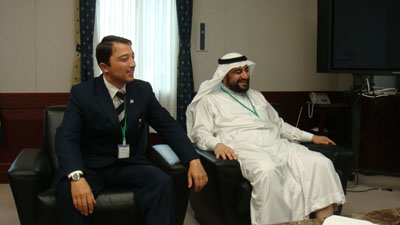 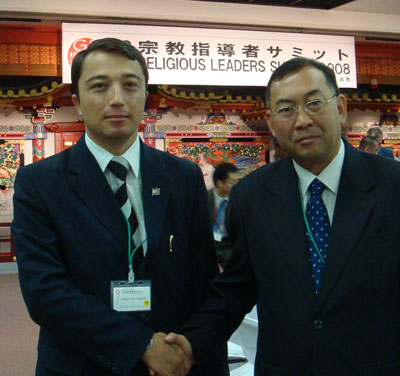 With HRH Prince SIRIVUDH Samdech Norodom, Privy Council to the King of Cambodia. 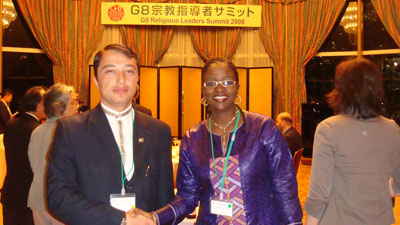 With Mrs.Ramatoulaye Ndao Diouf, Special Adviser on Children to the President of Senegal. 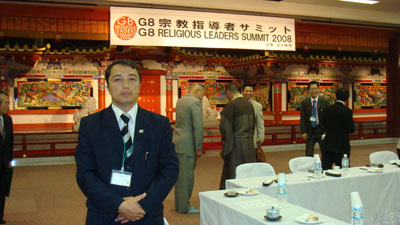